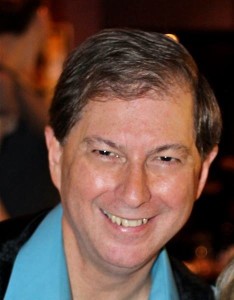 After working with Bick Goss and Frank Evans for many years as a Musical Mondays Theatre Lab volunteer and supporter, Stephen Hanks was elected the organization’s first Board President in 2010. Stephen was re-elected to the position in 2013 and is now also the Co-Producing Artistic Director with Frank Evans of what is now Manhattan Musical Theatre Lab.


During more than 30 years as a magazine editor/writer and book author for a variety of national magazines and websites, Stephen has written about sports, health and nutrition, parenting, politics, the media, and most recently, musical theater, and cabaret. Stephen is the Advertising Sales Director for Habitat Magazine (a publication covering life in New York Metro area co-ops and condos), and as a sideline writes reviews and columns about New York City cabaret for BroadwayWorld.com. Stephen also writes feature stories about cabaret for Cabaret Scenes Magazine and CabaretScenes.org.

In 2003, Stephen founded the Broadway Musical Fantasy Camp, which is a workshop for amateur performers that over the past 10 years has presented staged readings of classic Broadway Musicals (Stephen has had lead roles in Guys and Dolls and Damn Yankees.) In 2011, Stephen was an Associate Producer for the Off-Broadway musical The Fartiste. He lives in Park Slope, Brooklyn and can be reached at stephenhanks41@gmail.com